In this article, I will describe the process of building libraries and applications for Windows using the MinGW32 toolchain on Ubuntu.
Install wine, mingw:

After that, you can already build C / C ++ applications for Windows:

Collected exe can be checked with wine.

Next, consider the changes to the CMake assembly, the CMakeLists.txt file, add MinGW specific things to the assembly file:

In this article, I will describe the implementation of running autotest for ChromeDriver of the Chrome browser, which runs the module autotest translated from C ++ using Emscripten, reads the console output and returns the result of the check.
First you need to install selenium, for python3-ubuntu this is done like this:

Next, download ChromeDriver from the official site, put the chromedriver in / usr / local / bin for example, after which you can start implementing the autotest.
Below I will give the autotest code that launches the Chrome browser with the autotest page open on Emscripten, checks for the presence of the text “Window test succeded”:

Save the test as main.py and run python3 main.py

In this article, I will describe the assembly of a project consisting of several libraries using Emscripten.
Emscripten does not currently support building shared libraries, so the first thing we do is translate all the libraries from Shared to Static. Emscripten works with its include files, so you need to solve the issue with the visibility of header files, I solved it by forwarding the symlink from the system directory to the Emscripten toolchain:

If you use CMake, then you need to change SHARED-> STATIC in the CMakeLists.txt file of the add_library method. To build a library / application for further static linking, use the commands:

Next, you will need to build the main application indicating * .a library files at the linking stage. I could not indicate the relative path, the assembly completed correctly only after specifying the full paths in the CMakeLists.txt file:

Recently I decided to make all parts of FlameSteelFramework separate shared libraries, then I will show an example of a CMakeLists.txt file for FlameSteelCore:

The commands that CMake executes are: it collects all files with the * .cpp extension from the src / FlameSteelCore / directory in the shared library, copies all readers with the * .h extension from src / FlameSteelCore to include / FlameSteelFramework (in my case it is / usr / local / include / FlameSteelFramework), copy shared lib to the lib directory (/ usr / local / lib)
After installation, it may be necessary to update the LD cache – sudo ldconfig.
To build and install on Ubuntu (if you have the correct build toolchain), just run the following commands:

To check the installation process, I pass make prefix to the local makeInstallTestPlayground folder:

Not so long ago I came across an interesting project called Cling , a C ++ language interpreter that can work interactively from the console as well. You can check project here: https://github.com/root-project/cling
The installation for Ubuntu is the simplest – download the archive for the version you need, unzip it, go to the bin folder and run cling in the terminal.
The following is an example of loading the FlameSteelCore library, initializing the object, listing id:

An interesting feature of Emscripten, when starting a game loop through emscripten_set_main_loop, remember that exception handling must be re-added via try catch directly in the loop method, as runtime loses the try catch block from the outside.
The easiest way is to display the error text using the browser using javascript alert:

The Builder pattern belongs to a group of patterns whose existence is not particularly clear to me, I note a clear redundancy of this. Refers to a group of generative design patterns. Used to implement a simple interface for creating complex objects.

Simplification of the interface. It can facilitate the creation of an object in constructors with a large number of arguments, objectively improve the readability of the code.

C ++ example without a builder:

C ++ example with a builder:

However, in languages ​​that support named arguments, there is no need to use it for this particular case.

Immutability. Using the builder, you can ensure the encapsulation of the created object, until the final stage of assembly. Here you need to think carefully about whether the use of the pattern will save you from the high dynamics of the environment in which you work, perhaps the use of the pattern will not work, due to the simple lack of culture of using encapsulation by the development team.

Interaction with components at different stages of creating an object. Also, using the pattern, it is possible to provide step-by-step creation of an object when interacting with other components of the system. Most likely it is very useful (?)

Of course you need to * thoroughly * think about whether it is necessary to establish the widespread use of the pattern in your project. Languages ​​with modern syntax and an advanced IDE eliminate the need to use the Builder in terms of improving the readability of the code (see paragraph on named arguments)
Was it necessary to use this pattern in 1994, at the time of the release of the GoF book? Most likely yes, however, judging by the Open source code base of those years, few people used it.

The Composite pattern refers to structural design patterns.
Suppose we are developing an application – a photo album. The user can create folders, add photos there, and perform other manipulations. You definitely need the ability to show the number of files in folders, the total number of all files and folders.
Obviously, you need to use a tree, but how to implement the architecture of the tree, with a simple and convenient interface? The Composite pattern comes to the rescue. 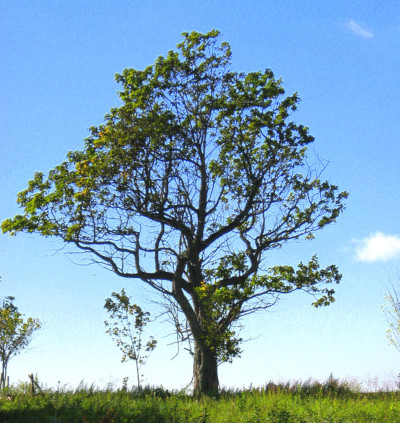 We implement the Component interface with the dataCount () method we need, through which we will return the number of files / directories. Let’s create a Directory class, with an interface that allows you to add / remove instances of classes that implement the Component interface, according to the pattern scheme, this is Composite. We also create the File class, store bytes with a photo card there, inherit from Component, return 1 through dataCount, they say one photo!
Next, in the Directory, we implement the dataCount () method – by passing through all the elements lying in the component array, adding all their dataCount’s.
Done!
Go example: